1884 – The first edition of the Oxford English Dictionary was published

1957 – The first black pilot flew a US passenger plane

Yep. Exactly two years to the day that I started my studentship at ESO here in Chile, at 15:33, I submitted my thesis. After four years of blood, sweat, tears and coffee (and there have been A LOT of tears!), I uploaded my 209 page, 49,000 word nemesis to the University of Manchester postgraduate department. I brought it to life (see previous post ‘My thesis, my baby’.) 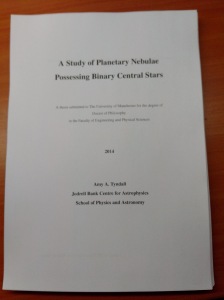 The thing that ruled my life for the past 4 years…

The depth of the beast…

It is safe to say that the Universe was largely against me (or so it felt) for the duration of this mammoth task. Not just for the writing, but during the entire process. I’ve gone through relationship break-ups, emotional breakdowns, lost two family members and a cat, moved abroad and back again three times, been on a liquid-only diet for six weeks, fallen out with ‘friends’, had my laptop die three weeks before I was due to submit, and have apparently had my external harddrive (containing ALL my work from the past 4 years and some things I had backed up from aforementioned dead laptop) stolen the DAY before. Needless to say, when my supervisor back in Manchester gave me the option to leave the submission for a couple of weeks to read through it afresh beforehand, I laughed and clicked ‘upload file’.

But let’s look at it from the flip-side: If I hadn’t gone through previous break-ups, I wouldn’t now be with Oscar. Without the breakdown and the weird unintentional liquid diet that came with it, I wouldn’t have become the stronger person I am today. The family I lost enriched my life. We got Frankie. I have travelled the world and seen things most people couldn’t even dream about. I have been able to separate the wheat from the chaff when it comes to my friends and those relationships are stronger than ever. My laptop dying means that I am now finally learning how to use a Mac after resisting it for so many years (and I must say, it’s growing on me!). As for my harddrive going walkabout with all my work on it? As Oscar said to me, “maybe it’s life telling you: ‘well done, now submit the thesis, then it’s time to leave all this sh** behind you!’ ”  – to which I initially replied, “well, I wish it could tell me in a slightly less stressful way!”, but now I think I have to agree with his ever-positive outlook.

So now, after I catch up on sleep and recover from the cold I have inevitably got from the lack of sleep and stress of the last few weeks, I have a lot to look forward to. We will be in our new house by 10th February (which will be a blog post in itself), and I’ll be back on my way to the UK for a month from 14th February to see my family and take the final test. I can now concentrate on the ESO-Chile outreach blog, and the webpage I am making for one of the Astronomy working groups based at Pontificia Universidad Católica (PUC) that Oscar is involved with. I can pick up learning español again, I can even just sit and read a book without feeling guilty!