There’s an article that has been floating around the internet recently listing the 11 hardest jobs to get in America, and ‘astronomer’ is second on the list after ‘astronaut’ (however, I’m guessing it’s not actually in any order of difficulty seeing as though ‘President of the US’ is another job on there. Although, you know… George W. Bush… How hard can it be?). It’s this (supposed) level of difficulty that the author of the article attributes to the low number of people within the profession.

Astronaut. Been there, done that. Piece of cake.

For those not in the know, the astronomical community is indeed VERY small. The International Astronomical Union (IAU) has approximately 10,000 registered members across 87 different countries – a number that would barely fill a small town in Wales. Astronomy is then subset into two main branches, observational and theoretical, and within each there are major groups of study such as cosmology, solar, stellar, planetary, galactic and extra-galactic astronomy. Going down again, we can further divide those groups into more specific niches; for example, within stellar astronomy alone you could specialise in supernovae, star formation, planetary nebulae and binary stars, amongst many other things. So if we take the very conservative estimate of 10,000 professional astronomers (which doesn’t include PhD students or those on periphery sciences such as geology and chemistry), you can imagine that that doesn’t leave many people to study each specific astro-niche. For the last major IAU conference I attended on planetary nebulae (my subject area) in Tenerife, there were roughly 150 attendees from all over the world – probably the same number of people who live in my apartment building!

What's the collective noun for a group of astronomers?

Don’t worry, there is some sort of vague point to my random factoids. One of the best bits about living in Santiago and working for ESO is that you get a lot of astronomer traffic. Whether it be fellow ESO peeps coming over from the headquarters in Germany for their duties or others appearing from other far-flung countries to carry out their own observing runs, there always seems to be a familiar face knocking about. Which, given the breakdown above, is not entirely surprising! There aren’t that many people, and of those you do meet within your subject area you are doomed to see them over and over…. and over… and over… again. 😉 A couple of weeks ago we had a little influx of visitors. We had Eric, originally from France but an indoctrinated Mancunian (booooooo!) who left the University of Manchester’s astro department (where I am studying) just before I arrived; the bella Italiana, Claudia, whom I first met during a conference on binary stars in Poland last summer; and then our Anglo-Nord, Paul, who I had the pleasure of meeting during my stay on La Palma where we were both working as support astronomers on different telescopes. So that’s three different astronomers who I met in three completely different countries (who have also all previously met each other, in different countries again!) all converging and staying in the ESO guest house that is a 5 minute walk from my apartment. Small world, indeed.

So one fine Saturday, I get called out of my flat to find four astronomers outside wanting to go do fun things – the aforementioned three, plus another Italian now living in Santiago, Milena. Milena mentions a wine fair somewhere to the south of Santiago. That’s all we need to know to be convinced. Things like location and how to get there are second. So we hop onto the metro, pick up another two astronomers in the form of Jackie and Santiago (yes, that is his name. After we introduced ourselves, Eric says to me: “did you shake his hand and say ‘Liverpool’?), and head to the end of the line. The southern-most metro grazes the the outskirts of the city on the way to the Concha y Toro vineyard, and makes a refreshing change to the concrete and lights of more central Santiago. After wandering the streets of the slightly dodgy-looking Puente Alto (Paul on walking past a barbed-wire laced nursery school: “Well, that looks child-friendly…!”) trying to figure out where we were meant to be going, we eventually get a taxi ride to parque Vicente Huidobro in the municipality of Pirque for our ‘fiesta del vino’.

For $6000 (Chilean pesos, not US dollars!), we were granted entry and 5 ‘taster-tickets’ to hand in to one of the many stalls  displaying their wine wares (although several of the vendors weren’t bothered by the ticket process and would just hand you a glass regardless… Needless to say, there were several merry Chilenos wandering around) – all produced in country, and of many different grape varieties. Alongside the wine stalls were food stalls selling a variety of tasty things, such as huge empanadas and BBQ skewers. And then there was a stage set up with different live bands playing throughout the day. Indeed, we ended our time there by having a good old dance to some great salsa tunes – it didn’t half make me homesick for La Palma! 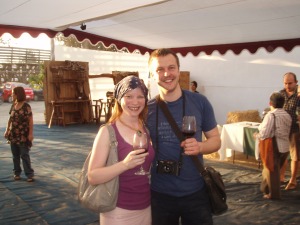 Reunited! Testing the wine with Paul

So not only was there food, drink and music in abundance, but also happening at the same time was another cultural gem… The rodeo!

The park contains its own rodeo ring, where people could flit in and out at their leisure to watch what was going on. When we first arrived, there were around 10 children down in the ring trying to catch a chicken. A little random. But chicken-chasing aside, it seemed to consist of various Chilenos riding horses, with the odd one jumping on the back of a cow to ride it around the ring for a bit before swinging around its neck to bring it to the floor.

A few times, they would swap the cow for an untrained horse (which we nearly got in the face a couple of times, sitting on the front row!):

And that was pretty much the gist… But was still strangely compelling to watch.

More often than not, the unplanned days turn out to be the best. It was a great afternoon spent in the company of some lovely people, and was a true local experience – blissfully, not a tourist in sight (not including us, of course!). I just remember sitting there in the evening sunshine, surrounded by park and mountains, chomping on an empanada with a glass of good red wine in my hand,  listening to the live band and watching people dancing in front of me… and for the first time in a long time, I felt content. I think Chile may be getting to me… 🙂