So, I managed to reach the end of my first official week at ESO! Although nothing terribly exciting happened, I thought I’d just give a little intro to the place… 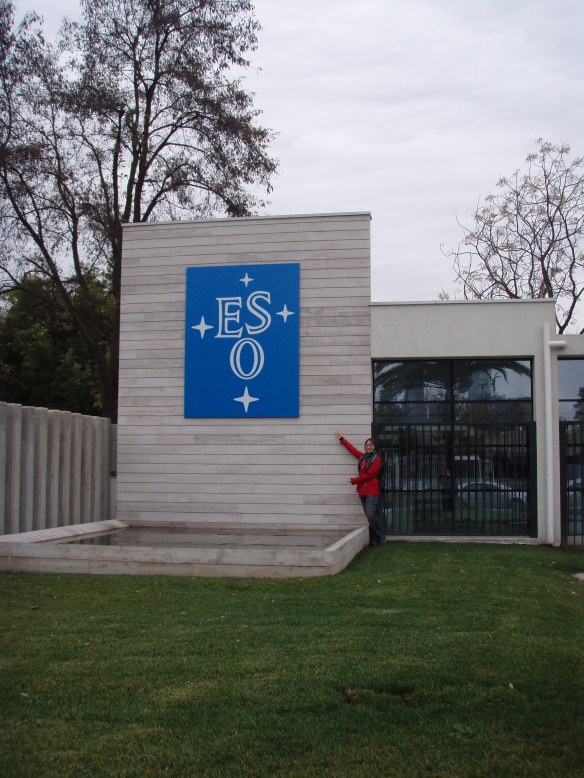 The office is located at the very end of Alonso de Córdova in Vitacura, one of the ‘posher’ parts of Santiago with its expensive boutique-esque shops, tree-lined streets and upscale restaurants. ESO shares its grounds with the ALMA office, which in itself is rather pretty – large grassy areas, plants, trees, flowers, rabbits(!), and a view of the mountains in the distance – a little slice of calm amidst the bustle of the city: 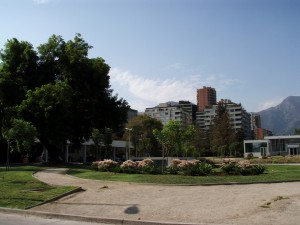 Inside the ESO grounds

The ALMA building... Ugly on the outside, snazzy on the inside

Inside the ESO building, you’re greeted with a large reception area complete with squishy leather couches and a lovely little central courtyard where daily coffee is held for the staff. The building is split over 3 floors – computing in the ‘basement’, meeting rooms, a scientific library (complete with librarian!), kitchen-diner (with access to a patio area/the gardens outside), admin and offices on the ground floor, then more office space on the second floor.

Courtyard area in the middle

The library - where you can sit and look clever

There are 2 student offices containing students who all started at different times, who are staying for various periods ranging from weeks to years, and who are all from different countries (including Chile, Mexico, Columbia, Argentina, Belgium, Czech Republic, Korea, France, Austria… and the UK of course) – so no doubt there will be a high turnover as the year progresses. Currently both offices are full, so yours truly is keeping company with Dave in his office… I feel a little bit like the kid who’s been allowed to temporarily sit at the “grown-ups” table! But as soon as someone leaves, I’ll be back on the kiddy table where I belong.

I’ve already had an interesting time with admin, as word doesn’t seem to have got round that I’m here at all…! Back when I was offered the position in August the email was CC’d to several people, and I was told to expect a contract in the post “soon”. So when it got to the end of the November, I emailed again as it had not appeared. The head of HR emailed back saying “Oh, I wasn’t aware that you’d even accepted the position, so the contract hasn’t been done yet”. Nice. And so I eventually arrive in Santiago, and after a week I go back down to admin to ask when I should expect my belongings to arrive (it’s been over 2 weeks since they picked it up so far). Again, go to the relevant person, and ask the question. She looks at me and says “…Who are you?” “Errm… Amy Tyndall?” “Never heard of you.” This doesn’t really bode well for my stuff not being in the bottom of some ditch, then. Thirdly, I was assured that my ESO email address would be active within a week. So after a week passed, I went down to computing to ask when it would be set up. Once more, I got “And you are?” followed by “Don’t know anything about you!”. It’s so nice to feel special within the work place!

Anyway, so the weekly routine is the usual 40 hour week type stuff. Every day at 11am, there is coffee outside in the courtyard, with “science coffee” on Wednesdays to discuss any recent papers, etc. Otherwise it’s just a good chance for some caffeine-injected yapping. We generally eat lunch together at about 1pm (ordering in sushi seems to be a favourite, mmmmmm!) During the week there are also various seminars, special invited speakers and what they call the “30 min talk” (does what it says on the tin). It’s this 30 min talk that I was asked to do when I last came to Santiago in May 2011. Turned out to be highly benificial to do, because a) the head of Science at ESO sat in on my talk who was also a pivotal part of choosing people for the studentships, and b) ESO apparently give you a free PhD for making the effort… 😉 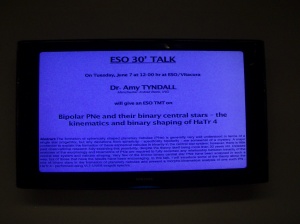 Dr Amy Tyndall... Does this mean I don't have to bother, now?!

So that’s the basics for you.

I’m currently at the Paranal observatory for a one-night run on the VLT, so my next update will be showing you cool pictures of very large telescopes… 🙂